There is welcome news for anyone who’s resolved to get fit in the New Year. Scientists claim we don’t have to spend hours every week slogging in the gym or jogging around a park in all weathers, along with the other January resolution makers.

Instead, they advocate a pioneering new quick fitness regime that makes remarkable claims: just a few 30-second bursts of intense exercise, amounting to only three minutes a week, could deliver the health and weight-loss benefits of hours of lengthy, conventional regimes.

Scientists at the universities of Nottingham, Birmingham and Bath say the secret is to commit yourself to three short bursts of highly intense exercise for 30 seconds each, with short rest periods between, in less than five minutes.

So far, their tests on hundreds of unfit middle-aged volunteers in Britain and Canada over the past eight years have shown those three minutes of exercise a week deliver the same significant health improvements as can be achieved through hours in the gym or on the running track.

Isn’t that good news! Why not try it out! The exact reason why the body behaves loses weight only after 3 minutes of exercise is not know. The high intensity exercise seems to be triggering the muscle cells to fasten the metabolism and thereby consume energy causing weight loss!

So get on with it! Get on a treadmill or a stationary bike and speed up for 30 seconds.

Note of Caution: In case you have not exercised before, its advisable to start gradually to avoid injuries! 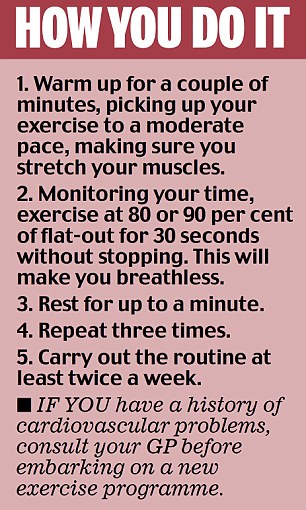 Is three minutes a week of exercise all you need to get fit? Scientists say ideal fitness regime involves intense bursts of activity | Mail Online.